The past two months have not only seen my physical health improve, but also the relationship with my sisters. The improvement in my relationship with them came about through a mutual anger at our mother. I spent this time not talking to her, and talking about her to my sisters. And while we are related through her, we are all different in the reasons we are mad at her. The texts with them and numerous phone calls all came to a head when our mother found out that they knew she and my father would be on a cruise to the Bahamas over Christmas, rather than at home. I was the only one who knew and as I was sworn to secrecy, it was apparent that I had told them. When this “betrayal of trust” was revealed, I braced myself for a major argument with my mother. She texted me and when I told her I didn’t want to get into an argument with her, she simply said that she argues with the middle sister, not me.

It was then that I immediately let go of my remaining anger toward her. I realized, in that moment, that while I had been caught up in all the negative feelings toward her, I failed to realize that she and I have a much different relationship than she does with my older sisters. I also realized that my own anger toward her had faded and I was holding onto it simply because my sisters were.

I began talking to her on the phone again and we soon made arrangements for she and my dad to stop at my apartment on their journey to Florida to hop on their Christmas cruise. The day of their one night stop has come and gone. And in its wake is a text that she sent the morning after. 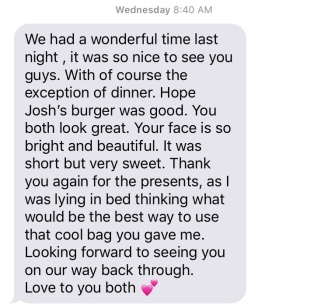 The three of us had gone out to dinner during their visit, the service and food were terrible, but we enjoyed each other’s company. Afterwards, we exchanged gifts and chatted for a while at the apartment before they headed to their hotel to rest after a long drive during the day.

They’re on a cruise ship right now, somewhere in the Bahamas, and when they dock next week, they will be stopping here again on their way home. I’m looking forward to it. Because no matter how angry I was at them two months ago, I’m not anymore. It is very obvious to me that they are happy. One look at the engagement ring my dad gave her shows me just how happy they are.

I will forever be touched by the text that she sent me. My mother was never one for sentimental, affectionate words when I was growing up. She didn’t have them, herself, when she was young. It wasn’t until much later in my life that she began to say “I love you”. I never doubted that there was love there. I never needed to hear the words. But despite that, I’m happy to hear them now. I’m happy that the anger didn’t take as long as I thought to get over. I’m happy to talk to her again…but really, we’re all happy, and that’s fine with me.

I'm a teacher. I'm a wanna be writer. I'm a thinker. I contemplate the world around me and all that I have experienced. I don't want my life or what I write about to be judged. For that reason, I have chosen a name for my blog that says a lot about me, but only I know what it means. My real name is not Cathy. I was not born in 1962, nor am I 62 years old. I prefer a sense of anonymity. It's freeing. It's what will allow me to write without inhibition. And really, that's the best kind of writing. View all posts by cathymack62